Do peruse the Blog for further examples of the illustration and fine arting of Cody A.J. Simpson, a broad collection spanning back through 2011. 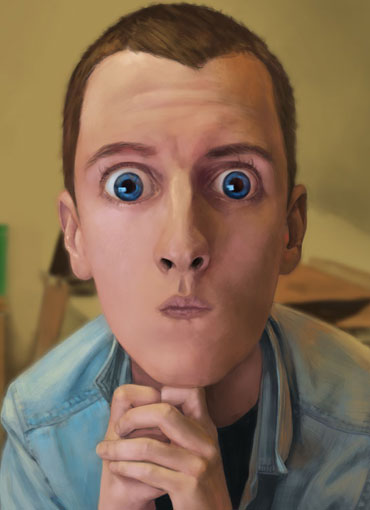 Auto-Biographical Thumbnail of the Artist (in Third-Person)

Cody A.J. Simpson was born in the province of Saskatchewan, and had the pleasure of spending his formative years not just in that "Land of the Living Sky", but also in British Columbia, Manitoba and Alberta. As a result, he identifies himself as thoroughly Western Canadian. If asked what, exactly, the differences are between a Western and an Eastern Canadian, he would mostly likely mumble something about how the word "car" is pronounced and then shrug helplessly.

His decision to become an artist can wholly be attributed to his mother. As an artist herself, she was able to fill his childhood with a never-ending supply of encouragement, easy access to art supplies, and paintings of wizards and dragons. The little seed of artistic ambition was planted early, quietly sprouting and slowly growing, until bursting forth in all of its horrible splendour when Cody was in his teens.

The content of Cody's personal work can easily be described as whimsical, humorous, and occasionally unsettling. This is very much caused by a life spent consuming the works of Bill Watterson, Neil Gaiman, and H.P. Lovecraft. His work is produced digitally with a firm grounding in, and respect for, traditional media.

He is fond of denim, his favourite month is October, and he is very much a creature of the night.

Currently available for private commissions and commerical work. Please direct all inquiries, including your requirements and budget, via electronic mail to cody@cajsimpson.com.